I go in blues.

In greens. In spores
light as breath, atoms
fiery redbirds
cracking
like wishbones.

I have not been a God

Honest
in my impiety, nor a King
pure in my filth.  I have been cobwebs,

I will not find myself here.

Deep
in the tall marble hills of eloping sunsets;
Where the colours sit heavy on Babylonian pylons
and the pig-headed people folk
smear marmalade on their fingers
to catch fireflies at dusk.

High
in the tooth-shaped clouds;
Where dragonflies are mere graffiti stains
aerosoled on wind
and the white noise perma-coats the icy ghosts
I spilt my mind for.

in rain juiced from morn
and broken
on lips parted like bread,
tongue drawn in wait for the final
almighty Right -
that weighty promise and
indignant birth chime that

will be famous in mud. 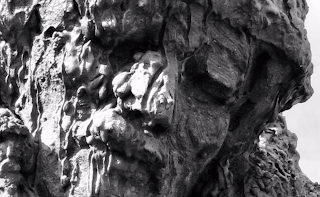 Somewhat overdue annual poem (2 and half years so... oops)
Posted by Ostensible Truth at 12:26 30 comments:

A Lesson in Melittology (or Tea with Plath) 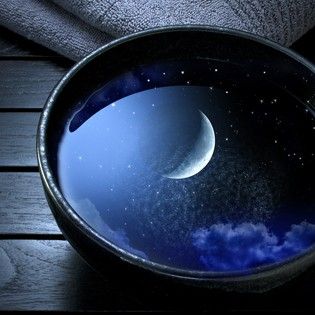 “You always made the best tea”, I confess.
Something in the method: fanning the bag
In the cathartic lung space ‘tween spoon and china.

“you’re too new” she mocks, “too shiny”,
Indisposed in her sketchbook, tracing the tentacled yew tree
Down to its most primitive honesty: its brutal
Old-man nakedness
and child-bearing insect chambers

“I don’t like eyes”, she offers after a pause.

“I have too many windows you see,
Too many stalls. Peepholes.
Too many cracks and crevices they can crawl into
Like after-9 anti-gentlemen
Hunting the Blood Egg.

O eyes, eyes, eyes,
Hooking to me like pollen to the pelt of the fattest,
Most barren honeybee.”

“But what of the faces? The sockets they alight?”
“They would have me a table-top tragedian!
A pocket-sized Rasputin wound up to dance my

O would you not just unplug it all?
Break from that wheezing old Undermoon?
What has it offered you anyways?

For I have known the pain of sunrise,
How it soars like a fist -
A swift influenza
Blistering the grassy worms that wriggle like
Fingers on my summertide lawn.

O tell me, would you not just unplug it all?
Detach from the great milky umbilical
That holds us all distinct?

They do not see, they just do not
See!
Poetry is no gift to beauty,
It is an amputation.

It is a funeral.
A grey hair. A gold tooth. A black leaf. A freckle.
It is a death
of part."

On Regimented Nihilism and Stockholm Syndrome

i.
The flowers are not welcome.
They are tuneless and crass, a greasy regiment
Of soil-fed priests cutting deals with vagrants
In their subterranean Duchy of undying Narcissi
And blood-metal towers.

They are headaches;
Tiny robots of precision,
Their sharp anvil teeth relentlessly grinding sun as sky-shy
Invertebrates bathe indecently in the thick oil
Of their ancestors
Coagulating clot-like in the straw-drawn rivers
Snaking around this Demi-kingdom of half-dead cigarette butts.

(I will not read the suicide notes they leave on the snowy cobbles,
I will not.)

ii.
They are of the Oldworld, prejudiced by their pedigree
And disfigured by their resolute nihilism. They care not for sentiment
Or blithe being, yet they are ubiquitous!
A rotating sorority of predatory nurses cloaked in the
Redundant asymmetry of their own spoon-fed asexuality.

(They ate all of the pigeons... they won’t come back.)

They have split my garden,
Ripped it blindly into a colour-coded
Regime of repetition, the leafy giants lassoing bees
Like furry humming balloons as laboured ants are held to order
Along the cracked checkpoints of inertia.
They are everywhere: a shoal of anaemic anaesthetists
Rooted in the waters of my subdued cognition,
But I will not join them!

iii.
I will not be that flower!
That sickle-spined orphan of communism,
Shuffling heavy-leafed
Into a personal apocalypse of howling morality.

I will not be that flower,
That rip-roaring shadow of light-stem
And endless eyes,

But I’d be the happiest prisoner...
Swapping spit with Moscow as Father rapes the winterlands
And the neighbours’ kids clap like geese
With fat livers.
Yes, I’d be the most obliging prisoner,
A downtrodden god with a dirty face
Knee-deep in reality and awash with the stains
Of a pre-war dystopia.

Oh, I’d be the most forgiving prisoner,
Breaking my wrists at the Altar of Weeds and
Content to accept the inevitable singularity
Of existence,

But I will not be that flower.

The Haste of Yellow Summer took the first bite.
I recline, a bruised mushroom
Peeling shamelessly in this musty kiln
Of faceless wasps. I threaten to explode.
To inflate to the size of a Roman God, all red-eyed
With the sale of Pompeii; but the bite was non-committal,
So I retreat.

Only half-awake
As It bloats recklessly along the suburban midriff,
Arms clouding a malarial sun that buzzes with the epileptic frenzy
Of a light-drunk cicada.

It’s always been like this,
Us sitting eye to eye,
As ugly as the other and skinless in a souring garden
Where the day is a butterfly-eater
And August is a hallucinogenic rash
That paws at the inchoate peace we've built
On dust caught out by prying sun-threads.

We have a difference of opinion you see;
I wear my religion like a hand-plucked sheepskin,
While it prefers to keep its in a loose jar that tolls
On the hour. We’ve come to an agreement of sorts... now.
But I dare not sleep, for once a year Winter feeds
Its securities into the mouth of this obese child of heat
And it once again dips its toes into the unchartered waters of
Our contested sovereignty.

One simply cannot underestimate the haste of Yellow.
See how it stalks the scrawny tide-turners as they drag
Their little pieces of sea across the land.
See how it disorientates the lowly fireflies as they impersonate stars
Around old whisky bottles. And see how it scratches
At my nuclear skyline of half-eaten curtains
And vacant window-lickers.

This will not do, this flailing treaty of disarmament.

I will raise an army - exonerate the dissidents, and mobilise
The curious little bone colonies that live like overfed lichen,
Gnawing on the shallow warmth of
A noxious rockery. Have you heard them?
That despondent rustle of
rock         upon         rock
In earthy mimicry. They know too well the
Realities of a world where you learn to cry
Before you talk.

Then we will rally,
A chain-smoking march of the Empties,
Arm in arm and sewn together as we scale the shoulder-blades
Of a foreign mountain and take Summer while it sleeps.

And then I will turn on them
Where all can see
And gobble them up
one
by
one.

For this is a one thing.
We are a one thing. It is I, and I alone
Who will raise this kingdom of white noise
And compulsory sedation. Who will reinstate a monopoly of grey
And paint a night that cloys like toffee.
For grey sets the scene for a most panoptic introspection,
And I’m afraid our displacement is far more guaranteed than I’d hoped.

All poems (or other material) published on this blog are subject to copyright and are the intellectual property of the author. No copying, extensive quoting, publishing, performing, storing or saving of any of the poems/writing here is permitted without the express written permission of the author (Sam T. as OT).

Any pictures used are for the sole purpose of artistic expression, and are accredited where possible. Copyright subsists in the original creator, and will be promptly removed upon request.